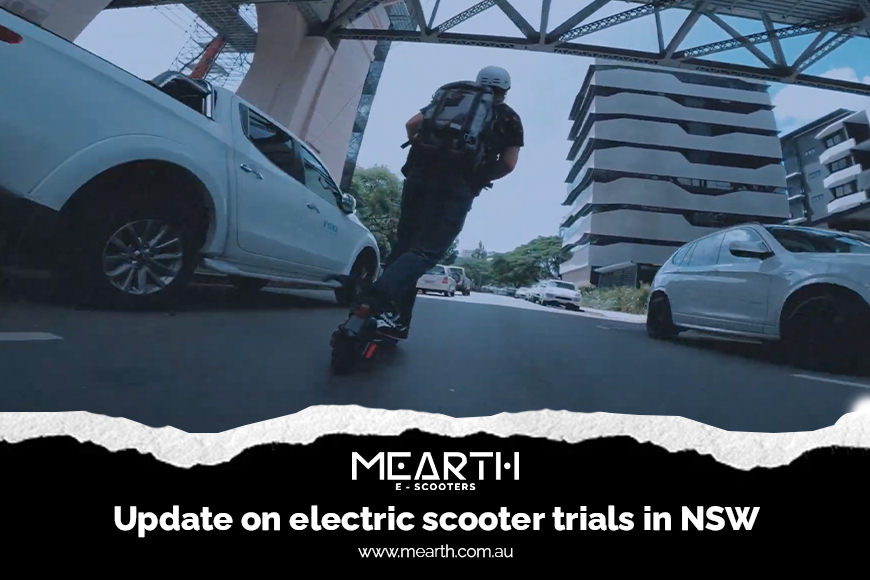 Electric scooter laws in NSW state that e-scooters are illegal to ride on public roads and road-related areas in NSW like footpaths, parking spaces, and open public spaces. According to rule 240(2)(c) of the NSW Road Rules, “A person must not travel in or on a wheeled recreational device on the road at any time while any person traveling in or on the device is wholly or partly assisted in propelling the device by means other than human power.”

According to legislation, a wheeled recreational device is defined as “a wheeled device, built to transport a person, propelled by human power or gravity, and ordinarily used for recreation or play…” These include rollerblades, roller skates, skateboards, scooters, and unicycles. However, it does include motor-assisted devices, a pram, a golf buggy, a stroller or trolley, a bicycle, a wheelchair, or a wheeled toy. Therefore, electric scooter regulations state that it is illegal to ride electric scooters in NSW in public if it’s powered by electricity.

So what happens to motor-assisted devices, like an electric scooter?

An electric scooter is legally classed as a motorcycle, so in NSW, a rider can be fined for riding unlicensed without a class R license. But even with the correct license, it is still illegal to ride an electric scooter in NSW on a road or road-related area.

Here lies a grey area that is unresolved. Amid regulations, it is not illegal for retailers and manufacturers to buy and sell electric scooters in NSW. However, sellers can face penalties if they misinform customers.

Mearth is a socially responsible company.

This is a matter where Mearth takes its responsibility seriously, both as a manufacturer and distributor towards its customers. Mearth has expert product specialists and caring retailer-partners ensuring that its buyers are well informed on the electric scooters’ features, their proper care, maintenance, and the legalities that bind them as customers and users of the product.

Up to this day, even with the growing popularity of electric scooters in NSW, the NSW government has yet to pursue e-scooter trials in the state. Previously, talks about e-scooter trials have begun in 2019 and in August 2020, when the National Transport Commission made recommendations to allow e-scooters in public. Proposed guidelines were presented.

Sydney councils that have refused to participate in an electric scooter trial have been accused of missing an opportunity to make the city more accessible. More details about what riders will and won’t be allowed to do are also revealed.

According to Transport for NSW documents, the trial will restrict hired scooters to 20 kilometers an hour on bicycle paths and roads that have a speed limit of up to 50 kilometers an hour. Privately-owned e-scooters are illegal in NSW and as such, will not be part of the trial due to safety concerns.

The NSW government will be focused on ensuring that e-scooter regulations are sensible and appropriate for NSW, as safety is paramount when it comes to e-scooter users and those around them.

“NSW has been criticized for being a bit of the laggard in taking on this technology but these are the benefits that we get to see the mistakes and successes other jurisdictions have faced,” said  Minister for Active Transport Rob Stokes, adding that “The NSW Government will be focused on ensuring that e-scooter regulations are sensible and appropriate for NSW, (as) safety is paramount when it comes to e-scooter users and those around them.”

He rejoined “We will be starting with shared schemes, so that is the schemes operated by private providers.” Shared public e-scooters will be available in the trial as the government is hesitant to roll out private usage due to safety regulation concerns. Stoke averred “It means we can learn the lessons in a regulated environment before extending these mobility concessions to private users as well.”

Nonetheless, local councils are able to submit an expression of interest to trial the devices. E-scooters may soon be available on the streets of New South Wales after the State Government announced a trial of the devices will be brought forward.

While electric scooters are permitted in Victoria, ACT, the Northern Territory, and Tasmania, they are banned in NSW. For most Australian States and Territories, it is still illegal to ride in public areas, as e-scooters, e-skateboards, and the like are not officially classified or recognized.

NSW is the last state in Australia to roll out a shared e-scooter scheme as the first trial has begun in July this year.

Last July 31, 2022, an orderly protest rally was held in NSW. At the rally, a recommendation was presented to all councils to: participate, address and accommodate e-transport in their area which will include private electric scooter owners. The key message was to assert that privately owned e-scooter riders are more responsible than users who use hired or rented e-scooters.

The said peaceful protest was registered with the police who will oversee it to ensure that it will not cause undue trouble or any unlawful behavior. The organizers encouraged e-scooter private owners to turn up to show the NSW GOV how many people in Sydney alone are being penalized by Kiersten Fishburn’s decision to exclude privately-owned E-scooters from the trial.  Protesters were enjoined to bring their helmets, pads, gloves, and their electric scooters.  The protest rally was held at 11 am. in Belmore Park in Sydney, just opposite the central station.

Meanwhile, Mearth, Australia’s first electric scooter developer, supports the petition to legalize electric personal mobility devices (PMD) which include electric scooters, electric skateboards, and electric unicycles. This move is in support of the petition and movement started by Electric Riders Australia previously. Electric Riders Australia was established to represent the people who ride different PMDs for different purposes. Since the start of the campaign, the organization has reached out to Ministers and Members to discuss the PMD’s legalization, partnered with industry leaders, and educated the public on their rights and the benefits of PMD.

The said petition addressed the President and Members of the Senate in the Australian Parliament to call on the Minister for Infrastructure, Transport, and Regional Development to support the amendment of the Australian Road Rules and legalize PMDs.

Of the 6,500 signatures targeted, only less than a thousand signature remains that need to be accomplished to complete their goal. Signing the petition will let these members know that there is a huge support for the legislation.

For its part, MEARTH, a leading, cutting-edge electric scooter developer in Australia, believes that innovative transportation not only relies on brands or manufacturers producing quality transport solutions. It also needs the support of the legislation. Although the future of electric scooters and other PMDs is somehow not very defined, making available multiple transportation options will enable commuters to travel quickly, safely, and efficiently at a reasonable cost.

Let your voice be heard. Join the movement with Mearth. Share Mearth’s Facebook post to encourage more PMD riders to sign the petition and support the cause.  Confirm your support by going to https://electricriders.org.au/petition  and adding your name and details to the petition.

What Exactly Does A Criminal Lawyer Do?

Take Your Chance to Try the Sleep Test in Hong Kong  

Find the benefits of Ready to Cook Foods at Distacart