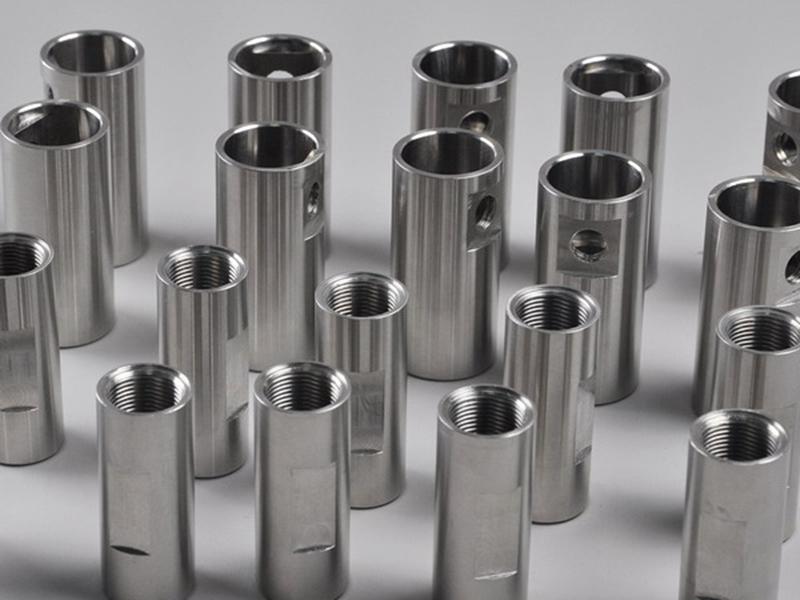 CNC turning is a popular machining method used to create cylindrical parts. While it is effective for many applications, CNC turning parts can be deformed when machining thin-walled parts due to the high forces involved.  Deformation can lead to several problems in the component such as reduced strength, leakages, etc.

When turning thin-walled parts with metal turning tools, it is important to make the clamping force as uniform as possible in order to avoid deformation. If the clamping force is not uniform, the part will be deformed and the dimensions will not be accurate. There are several ways to overcome this problem:

1) Use a chucking system that evenly distributes the clamping force around the circumference of the part.

2) Use a live tooling setup with a steady rest or collet chuck to support the inner diameter of the part and minimize deflection.

4) Support the outer diameter of the part with a steady rest or collet chuck.

5) Use an air blast to cool the cutting tool and workpiece and minimize tool deflection.

By following these tips, you can make sure that the clamping force is uniform and avoid deformation when turning thin-walled parts on a CNC lathe.

CNC turning is a process that is often used to produce metal parts with precise dimensions. However, when working with thin-walled parts, this process can cause deformation due to the high temperatures and forces involved. In order to overcome this, it is necessary to change the positioning and clamping design of the part.

The first step is to create a jig or fixture that will support the part during machining. This jig should be designed so that it evenly supports the part all around its circumference. It is also important to make sure that the part is securely clamped in place so that it does not move during machining.

Next, the cutting tools must be carefully selected according to the material being machined. For thin-walled parts, it is necessary to use tools with sharp cutting edges in order to minimize deformation. The cutting speed should also be kept as low as possible to further reduce the risk of deformation.

Finally, the machining process must be closely monitored so that any signs of deformation can be immediately addressed. If necessary, the process can be stopped and the part repositioned or replaced in the jig. By following these steps, it is possible to produce high-quality metal parts without experiencing any deformation.

One of the main issues that CNC machinists face when turning thin-walled parts is deformation. This is caused by the cutting force exerted on the workpiece, which can cause it to warp or distort. There are several ways to overcome this, including adjusting the processing parameters to weaken the effect of the cutting force.

Finally, another way to reduce deformation in CNC turning is by using a softer material for the workpiece. This will help to absorb some of the cutting force and prevent the workpiece from warping.

In order to overcome the deformation, we need to add auxiliary support to the workpiece during machining.

The specific method is as follows: when CNC turning thin-walled parts, firstly set a small diameter in front of the program, and then gradually increase the diameter while machining. In this way, the deformation of thin-walled parts can be effectively prevented.

Another way is to use a three-jaw scroll chuck or a four-jaw independent chuck to clamp the workpiece, so that the workpiece can be clamped more tightly and will not deform during machining.

Through the above method, we can effectively prevent the deformation of CNC turning thin-walled parts.

If the chips are not removed properly, they will accumulate on the cutting edge of the tool and cause it to overheat. This will cause the tool to expand and deform the workpiece. In order to avoid this, it is important to use the proper chip removal techniques when turning thin-walled parts on a CNC lathe.

The first step in proper chip removal is to use sharp cutting tools. This will help to minimize the amount of heat that is generated when the tool comes into contact with the workpiece.

In addition, it is important to use low cutting speeds and high feed rates. This will help to prevent the tool from overloading and causing deformation.

Finally, it is important to use a coolant when turning thin-walled parts on a CNC lathe. This will help to remove any chips that have accumulated on the cutting edge of the tool and keep the temperature of the tool down.

Thin-walled parts are often deformed during the CNC turning process. This can be due to a number of factors, including incorrect tool selection, inadequate setup, and improper cutting parameters.

In order to produce high quality and consistent parts, CNC turning centers must overcome the effects of deformation. Deformation can cause a number of problems in thin-walled parts, including poor surface finish, lack of dimensional accuracy, and reduced strength. By using the talked methods, CNC turning centers can produce high quality and consistent parts despite the effects of deformation.

Would You Consider Starting A Career In Tech Like A Pro? These 5 Tips...

How to Choose A Casino for Playing Live Casino Malaysia?

What Are the Responsibilities of a Wedding Florist for a Wedding?